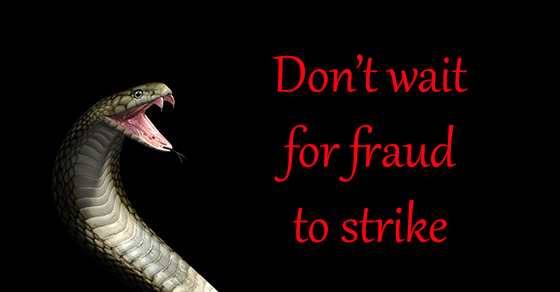 Fraud costs companies 5% of their annual revenues each year, according to the most recent Report to the Nations on Occupational Fraud and Abuse published by the Association of Certified Fraud Examiners (ACFE). To illustrate what this means, the 2016 edition of the global fraud study reports that the median fraud loss among for-profit businesses was approximately $180,000.

Your company can lower its fraud risks by implementing various policies and procedures. A strong control system reduces the opportunity to commit fraud, making it harder for dishonest people to steal assets, engage in corrupt business practices or manipulate your company’s financial statements.

Managers may be reluctant to invest in internal controls for various reasons. They may have limited resources and underestimate the value of a strong control system. Or they may mistakenly believe that implementing internal controls will signal distrust toward employees, suppliers and customers.

But investing in antifraud measures can be money well spent: The ACFE reports that the presence of strong controls was correlated with both lower fraud losses and quicker detection. Additionally, a lack of internal controls was cited as the primary factor in 29% of the cases analyzed in the 2016 fraud report.

The most common internal control measures implemented by U.S. companies in the 2016 fraud report include:

Some internal controls — such as management reviews, job rotation and mandatory vacations — are relatively inexpensive. These simpler options can be effective for smaller private companies with limited budgets.

Fraud has been a hot news topic in recent years, causing companies to reinforce their defenses. The ACFE reports that, compared to 2010, the use of whistleblower hotlines is up 9% and fraud training programs for employees have increased by 8%. Contact us for help evaluating your internal control system — or investigating fraud if you suspect wrongdoing.

« Back to Blog
Copyright © 2021 WOB Accountants and Advisors. All rights reserved.